Chikungunya is a virus that mosquitoes transmit. Also known as CHIKV, the virus was first detected in 1952 in southern Tanzania.

Chikungunya is a virus that mosquitoes transmit. Also known as CHIKV, the virus was first detected in 1952 in southern Tanzania. The name means “to become contorted” in the Kimakonde language. This name refers to the stooped appearance people get when they have this virus. This occurs due to joint pain.

The condition primarily occurred in Africa, Asia, and the Indian subcontinent for several decades and spread to northeastern Italy in 2007, according to the World Health Organization. It has since been diagnosed in the Americas, in the Caribbean, in 2013, according to the Centers for Disease Control and Prevention, and elsewhere in Europe.

From 2006 to 2009, an estimated 106 chikungunya cases were diagnosed in the United States, in people who had contracted the virus while traveling, according to the Center for Infectious Disease Research and Policy (CIDRAP). These cases didn’t lead to an epidemic. 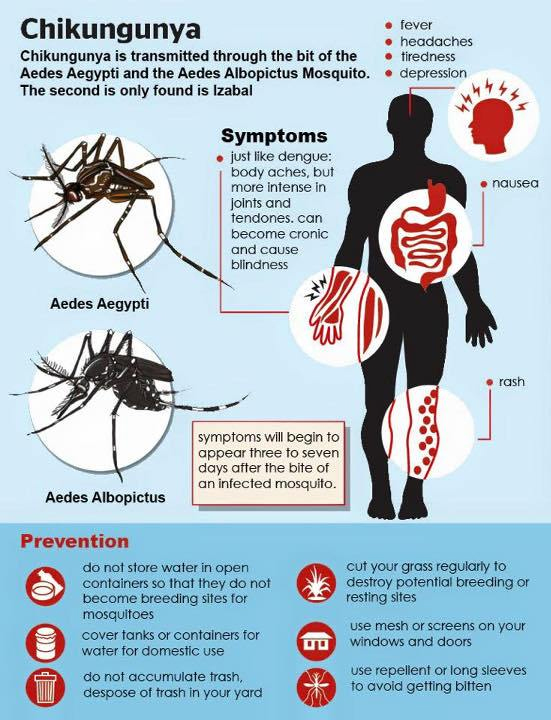 What are the symptoms of chikungunya?

Chikungunya usually doesn’t cause death, but the symptoms can be severe and debilitating. The most common symptoms are joint aches and pains. The disease can also cause:

Symptoms normally begin after three to seven days, but they can take up to 12 days to appear. Most people recover from it, but the symptoms may last for weeks, months, or years for some people. The symptoms can be similar to the symptoms of dengue fever and Zika, which makes diagnosing it difficult. Chikungunya symptoms differ from those of dengue fever because the pain is more intense and more concentrated in the joints. This joint pain can last for years after primary chikungunya symptoms have largely passed. If you get chikungunya once, you most likely won’t get it again.

Two mosquito species, Aedes aegypti and Aedes albopictus, are carriers of the chikungunya virus. These mosquito types are most common in the southeastern United States and tend to bite people in the daytime. A mosquito can transmit the virus by biting a person. The virus then multiplies rapidly in the blood.

Mosquitoes also transmit viruses such as dengue and West Nile. The chikungunya virus is more likely to infect a person than other mosquito-transmitted viruses. After a bite by a carrier mosquito, 72 to 97 percent of people will experience symptoms, according to CIDRAP.

Currently, no vaccine is available to protect against the chikungunya virus. Prevention involves reducing the risk of getting bitten by a mosquito. Follow these tips to avoid mosquito bites:

On a larger scale, prevention aims to reduce the number of water-filled habitats that can be breeding grounds for mosquitoes. During an outbreak, people may use insecticides to kill mosquito populations.